‘A Stranger in Paradise’: Richard Hunt as a Kid (Book Excerpt #2)

Today would have been Hunt’s 64th birthday. In honor of that, here’s another scoop from Funny Boy: The Richard Hunt Biography.
~ 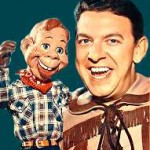 At just five years old, Hunt made a gutsy attempt at a television debut, a prescient predecessor to cold-calling the Muppets. He landed a spot in the kids-only audience of the Howdy Doody Show, at the NBC studios at 30 Rockefeller Plaza. His parents had gone to great lengths to acquire “the hottest ticket in television,” most likely through Richard Senior’s job at the networks. The “Peanut Gallery” seated forty kids between 3 and 8 years old: ten tickets went to a sponsor, four to the host, a few to each cast member, and the rest to NBC’s public relations department. “Hardly anyone who wrote in for a ticket ever got one,” admitted host “Buffalo Bob” Smith.

And every kid wanted one. Howdy Doody hugely influenced Hunt’s generation, with Dave Barry calling the red-headed puppet one of the “two most important personalities of the 1950s” (the other being Nixon). The Boomers, Barry waxes nostalgic, “wanted more than anything in the world to be in the Peanut Gallery… The Peanut Gallery consisted of real live kids just like us”. These children had an unusually participatory role for an early television audience, singing the theme song and accompanying Smith on commercial jingles, hawking the likes of Twinkies and Wonder Bread.

Yet this participation only whetted Hunt’s appetite. His mother remembers sitting in a separate room with the other parents, watching the live feed with pride and terror as Hunt approached the host seconds before the end of the show. Hunt tugged on Smith’s coat and said, “I’m a magician and I want to do a magic trick.” “I don’t think we have time,” said Smith dismissively, but Hunt had already drawn the trick from his pocket. “He completed the trick just as it went to black.”

Hunt’s sister Kate says this story is “so Richard.” “He had that personality from the time he was born. He used to sit on the toilet and sing: ‘Take my hand, I’m a stranger in paradise.’”

—
And here’s the first excerpt — the opening paragraphs of the book!

“I’m a magician,” Jane Hunt, interview with the author, November 2009.

“So Richard” and “He had that personality,” Kate Hunt, interview with the author, February 2010.