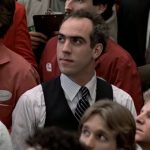 Hunt loved to tell the story of being recognized on the street for his role in one of 1983’s biggest movies. “You. Trading Places. You’re in that last scene.” Hunt preened, thrilled to be seen not just as a puppeteer but as an actor. “Yeah, I was in Trading Places. What was it about my performance that made you remember me?” “Oh nothing,” said the man. “I’m a projectionist. I’ve seen that movie at least 200 times!”

It was a running joke with Hunt that his work was cultishly famous in some ways and absurdly obscure in others. It made a certain kind of cosmic sense.

Regardless, Hunt plays a memorable minor role as the frazzled commodities trader Wilson in Trading Places, 1983’s fourth highest-grossing film, no small feat in a year led by blockbuster Return of the Jedi. On Trading Places’ 30th anniversary, Business Insider still considered it “the greatest Wall Street movie ever made”. In the Prince and the Pauper-inspired tale of rags to riches – and riches to rags – pompous, prosperous Louis Winthorpe III (Dan Ackroyd) literally trades places with destitute wisecracker Billy Ray Valentine (Eddie Murphy), through manipulations by the affluent, elderly Duke brothers (Ralph Bellamy and Don Ameche, who came out of a 13-year hiatus to take the role). Hunt’s character Wilson plays eager flunky to the Dukes. Frank Oz briefly appears as a sneering policeman; Oz makes six different cameos, generally as surly officials, in films by director John Landis. Oz speculates that Hunt got his role through meeting Landis on the set of the Muppet Movie, as Landis performed Grover in the 250+ puppeteer finale. “Both of them are very warm and gregarious people,” says Oz. “I bet they started talking.”

Hunt-as-Wilson’s star moment comes in Trading Places’ frantic climactic scene, shot on the commodities trading floor of the World Trade Center, packed with real-life traders playing extras. The Duke brothers, as part of their scheme, order Wilson to buy up orange juice commodities – but as the price suddenly plummets they about-face and exhort him to sell. The windowless room is jammed with traders trying to dump the increasingly worthless product. Wilson gets elbowed and swept up in the crowd. “Selling! Sell! Sell…ing…!” cries Wilson as he wilts and falls in a dramatic faint.

Yet for all the hilarity of the performance, Hunt wasn’t happy with it. “Should I do something like this?” he had asked Landis, before doing what he thought was a practice run. “All right, I’m ready to do it now,” he told Landis, who said, “Oh, that’s okay, we got it.” Hunt was “absolutely horrified,” says Minogue. “He was embarrassed by that scene, because he knew he could have made people laugh more. He talked about that a lot.” Hunt wasn’t being humble, just his own most demanding critic, wanting to be seen at his best – especially when his face, for once, was finally so widely seen.