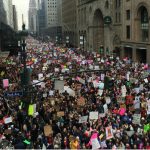 I am full of hope after participating in and reporting on today’s Women’s March in New York City. About 400,000 people marched from the U.N. to Trump Tower, joining over three million people who marched across the country, and millions more in the streets around the world. Here are some snippets from my reportage.

Why are you marching today?

Marcie from New Jersey: I’m marching because I’m a woman and I want to make sure we maintain our rights. I’m here for women – and anybody who’s oppressed, really.

Kathy: I’m here for science – to protect science and scientists and all of the good things that we’ve done that they’re trying to destroy.

Melissa: I am a teacher in Queens, and this is just not acceptable.

Lisa: I’m here because have a daughter who’s almost 21, and I want her to have rights over her body.

Alison from CT (on crutches with a broken foot): I just had to come and be a part of it, even though I can’t march right now.

Woman in white doctor jacket and stethoscope: I’m here today because I fear for what the future will look like in terms of treating my patients. As a future gynecologist, I might not be able to access the medicines they need, which is an infringement on medicine itself.

Joanne (sign says “I Survived Breast Cancer – Now I Have to Fight Fascism”): I’m a breast cancer survivor, I’m 41, and I may lose my health insurance if ACA is repealed because I’m self-employed and I’m not married. I’ll be in a real bind.

Linda from White Plains: Trump is the worst thing that has ever happened to this country.

Holly from CT (sign says “I Can’t Believe I’m Re-Protesting This SHIT!”): I’m here because the things that are going down, the anti-LGBT, anti-woman, anti-Muslim, all the anti-everything, I’ve had enough of it, and this is what I’m doing to try to make it stop. I’m glad to see so many other people that are sharing the same idea.

A lot of women in those wonderful bright pink pussy hats, most if not all of them clearly handmade.

Also a lot of tiny hands jokes (and all that implies):
Keep Your Tiny Hands Off My Human Rights
Trump: Even His Inauguration Is Small

And sometimes both:
Keep Your Tiny Hands Off My Pussy

Many nods to inspiring women:
We Are the Resistance [image of Princess Leia]
What Would RBG Do? [image of Ruth Bader Ginsburg]
“People Have The Power to Redeem the Work of Fools” – Patti Smith
“Revolution Is Not a One-Time Event” –Audre Lorde
Nolite de bastards carbonundrum [from Atwood’s The Handmaid’s Tale]

Hamilton:
History Has Its Eyes on You
Immigrants – We Get the Job Done
“Rise Up” – Lin-Manuel Miranda

And even Grease:
Keep Your Filthy Paws Off My Silky Drawers

A lot of great women’s rights riffs:
We’re Here to Sync Up Our Periods
GOP: Pelvic Enemy #1
Patriarchy Is For Dicks
If You Cut Off Our Reproductive Rights, Can We Cut Off Yours?
These Boobs Were Made for Marching
Think Outside My Box [image of fallopian tubes giving the middle finger]
Grandma Says No! [image of an older woman giving the finger]

The creativity of the signs was not quite matched by the chants. “This is what democracy looks like” was very popular. “Hey hey, ho ho, Donald Trump has got to go” turned into “Ho ho, hey hey, the USA is super gay,” which devolved into “Pence Sucks Too”, ironically using seventh-grade homophobic language to call out the VP on his homophobia. I appreciated the supportive intentions of the call-and-response where the women shouted “My body! My choice!” and the men replied “Her body! Her choice!” but it seems more supportive to step back and allow women’s voices primacy, if only for a day. Similarly, I am still digesting the experience of being in a sea of white people chanting “Black Lives Matter!” – again, good intentions with awkward results. Though perhaps not as awkward as the crowd at one point simply chanting “Meryl Streep! Meryl Streep! Meryl Streep!”

More Signs:
Truth Is a Living Thing
Canadians Don’t Let Their Sisters Down [thanks ladies!]
Love Has No Border Control
Disability Rights Are Human Rights [older woman in wheelchair]
Not Gay As In Happy, Queer As In Fuck Fascism
Our Grandparents Didn’t Fight Nazis So You Could Put Them in the White House
You’re Revolting, We’re Revolting
Kind is the New Sexy
Unite and Conquer
They Tried To Bury Us… They Didn’t Know We Were Seeds

This entry was posted in Uncategorized and tagged Inauguration, NYC, Women's March. Bookmark the permalink.