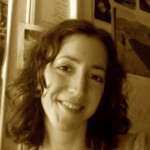 Jessica Max Stein (“Max”) has been a New York-based writer since the early 90s. She teaches writing and literature at the City University of New York (CUNY), and received her M.F.A. in creative writing from Brooklyn College.

Stein’s writing has been cited in the New York Times, received an Amy Award for young writers from Poets and Writers magazine, and won an Ippie for Best Editorial from the Independent Press Association. A reporter and former editor of the Indypendent, Stein has published work in over 100 magazines and journals, including a longtime column at The Bilerico Project.

Contact the author at richard.hunt.biography at gmail dot com.