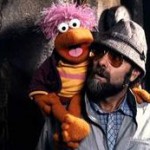 Today is legendary puppeteer Jerry Nelson’s 76th birthday! To celebrate, here’s Part Two of our interview, in which he talks about performing on Fraggle Rock, losing his daughter Christine, working with Richard Hunt and Jim Henson, and more!

Jessica Max Stein: Let’s talk about Fraggle Rock. You play a major character in almost every Fraggle sub-world: Gobo, Pa Gorg, and the Trash Heap. Unless it’s a Doozer-centric episode, you are practically in every scene. Now, when two characters who are played by the same person talk to each other, like when Gobo goes to the Trash Heap, how do they do that?

JN: Well, they prerecord one of them, and somebody else does the lines.

JMS: Oh, so that’s lip-synching. Is one person generally doing both?

JN: Except for the close-ups. If there’s a close-up, they would wait until after we did what they call a master shot. That’s like over the shoulder, or off to the side, including everything. And then they would do close-ups. They could get close-ups sometimes as they were doing the master, but not always, because of the angle. The way the puppet was looking, the angle wouldn’t be right, necessarily. So they’d generally do the close-ups then after.

If they were doing Trash Heap with Gobo, I would do the Trash Heap, and I would have prerecorded both those lines. Either that, or, if it wasn’t very much, I could switch. I could do both. If it was a lot of dialogue, it would not be easy to do.

JMS: So you can be under Marjory, and then just switch voices.

JN: Yeah. [Marjory voice]: So, little Fraggle, tell me what’s the problem. [Gobo voice]: Well, Madame Trash Heap… You know, like that. So that’s possible. But it’s not possible for big speeches and a lot of fast things.

In fact, there have been several productions, most notably the Canadian productions, where we had to have Canadian content, so we would prerecord the whole show. Frog Prince [in 1971] was like that. The whole show was prerecorded, and then they would put in beeps leading up to the speech, and then you would synch to them. It’s more labor-intensive than just catching it as you’re doing it, but you have to conform to what their rules are. So we used their actors. 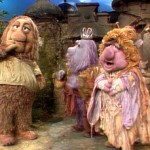 Now, when we did Fraggle Rock, the people we got, most of them were puppeteers. Some of them were mimes, like Rob [Mills] and Trish [Leeper] and Gordy [Gord Robertson] were mimes. [They played Junior Gorg, Ma Gorg and Pa Gorg, respectively, wearing the body costumes while the puppeteers voiced remotely and controlled the face via remote control.]

That’s why they had such a great sense of movement in those large costumes. You have to be bigger than life, because you can move, and the costume barely twitches. They had a good sense of that, all three of them.

JMS: Tell me a little more about Fraggle Rock. I know that Richard stepped up, in terms of the show. You had Jim and Frank having a lot of other things going on.

JN: They were doing other things at that time, that’s true. And that was the first show that Jim pretty much trusted everybody and knew that everybody would work to his standard. He started off directing the show, and eventually he found directors that they would use. We tried some that didn’t work very well, and they didn’t come back. We found quite a few that worked really well with us. And Richard eventually directed one as well.

JMS: “The Honk of Honks.” Any memories of Richard directing? 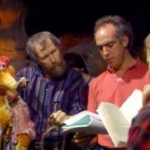 JN: He pretty much just would do it. He trusted a lot to the cameramen, because they know their job, so he trusted their judgment on what they did.

But yeah, Junior, and Mudbunny was a really heart-warming character. And of course Philo and Gunge. He and Davey [Dave Goelz] did Philo and Gunge. They had an episode too – their episode, where they leave the trash heap. It’s fun.

JMS: I love Gunge and Philo. There’s a way in which Fraggle Rock is very Canadian, and then all of a sudden it’s like, “Am I in Brooklyn?” And the Trash Heap – I love Marjory.

JN: She was great fun to do. I based Marjory on Maria Ouspenskaya, the great Russian actress. She played gypsies a lot, the gypsy lady. Somebody wrote an irate letter saying, “I’m so disappointed in your show. My son asked me why the trash heap sounded like Grandmother. So you’re equating Jewish grandmothers with trash.”

So for about four or five shows we went outside that. I did an English, I did a black… I said, “Okay, we’ll just offend everybody, and then I’ll go back to being the trash heap.”

They’re doing a Fraggle movie. I don’t think they’re talking to anybody who was involved [with the original series]. I don’t know in what direction they’re going to go with that. It seems strange. I think they’ve got somebody else for music too. 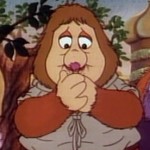 JMS: It’s interesting when they do the new versions, to see what feels essential about an older piece.

JN: I know one thing that bothered Richard, when they did the cartoon version of Fraggle Rock, Junior was nowhere near Junior in the Canadian version.

The guy who did me [Gobo] was pretty close, and the people who did Red and Mokey and Boober, and Pa Gorg, they were all very close. The actors tried to give credence to the original, except for that guy who did Junior. Richard hated it. It ate at him that the guy didn’t even try to come close to the character.

So it’ll be interesting to see what they do with this, and if they try to stay close to what it was, or if they’ll just go in a whole new direction.

JMS: The AIDS crisis became a big issue during the years of Fraggle Rock (1982-87). Did you and Richard talk much about his private life?

JN: No. Richard, to me, was asexual. I think after he realized he had AIDS, he was maybe a little more outgoing with that. I have to admit that when Richard got AIDS, I was angry with him. I had never really thought about that aspect of Richard. 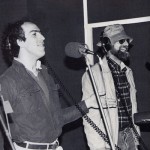 In all likelihood, laughter was probably the way Richard covered up a lot of his feelings. I think that Richard laughed it off, because it was either that or cry. Richard was not a crier.

That’s the thing, as much as anything, we were trying to do when we worked puppets. We were trying to make each other laugh, or make Jim laugh. Or Jon Stone laugh. Because we knew if we got them, it was funny. [laughs]

JMS: I was wondering if you wanted to talk about your daughter Christine, anything that you want people to know or remember. 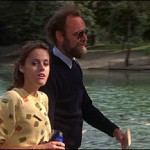 In a way, there were a lot of different ways of looking at it, I think because both Jacquie [Gordon, Christine’s mother] and I were right there when Christine died. Although she was not conscious, I think she knew we were both there. When I talked to her I could see tears in her eyes. I’ve asked nurses about this, and they say, “Oh, that could happen, it doesn’t necessarily mean anything.”

JN: I know. I was there. And I still can’t read it. So your life changes in many ways. But in a lot of ways, too, I hate to even think or talk about the hardship for me because I know the hardship for Christine throughout her life was so much more intense.

It’s interesting to me that now I see a lot of the things that she was going through. Not necessarily the same things, because this [chronic obstructive pulmonary disease] isn’t cystic fibrosis, but it’s similar. I know that I couldn’t understand. I could try to understand, but I had no grasp of what she went through in actuality. Now I do. 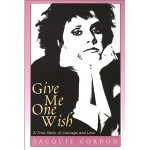 But I’ve only been having a real problem with this since 2006. So I would have a long way to go before I would understand what she had to go through.

Jan [his wife] and I talked about having a child, and I said I would not want to ever take a chance on being responsible of putting another child through that.

Although now, their techniques and what they’ve done and learned is better. I just had a letter from a young man who’s 30 and has cystic fibrosis. The life expectancy for Christine was in her early teens, so we were lucky, in a way, that she lived until she was 21.

I think about her a lot, still. I still love when I can have a dream. And I do have them still. I have dreams of Richard and Jim, too. It’s a blessing when you have those dreams, some extra time. And in the dreams, nothing is ever wrong with Christine. She doesn’t have any problems.

JN: It doesn’t hurt us to be sad sometimes. I think it’s not a bad thing at all. My mother used to sing me a lullaby. It’s called “Babes in the Woods.” [crying] I cry every time I think of it. You think, “Why would a mother sing a song that’s so sad?” And I know why. I don’t know that she consciously knew this, but, I believe, it teaches you compassion. And maybe a little humility. 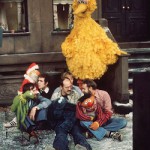 JMS: On a lighter note, what was it like working with Jim Henson? Did he sleep? I mean, how did he do so much?

JN: Yeah, he did sleep. As a matter of fact, often he would stay in town. When I first started working for Jim [in the late ’60s] they had two floors. The bottom floor downstairs was Chuck’s Composite, which was an advertising and model hangout [in New York]. The Muppets had the next two floors. A floor-through which was a big office, with supplies of some kind, and upstairs Don Sahlin had a workshop where things were built. In the back, Jerry Juhl had an office where he could write. And Jim often used to sleep there when we worked late.

I remember traveling on a plane somewhere with Jim, I think it was to England. The whole flight, Jim was working and doing stuff. I watched a movie, and slept. I looked at him and I thought, “If you have to work that hard to be the boss, that long, I’m glad I’m not the boss.” Because I don’t want to work that hard.

It’s a schedule. Fraggle Rock we had to finish Friday, we had to finish in a week. We couldn’t go over into the next week. So Friday night came; if we weren’t done, we went until we were done. I think the latest one they ever had – and I wasn’t there for that one, thank goodness; I finished early – but they worked until 3, 4 o’clock in the morning on a Saturday morning to get the show done.

Yeah, it’s good when you’re young. And we were all still relatively young then. I was probably the oldest of that group. Jim was two years younger than me, and Frank was another two or three years younger. 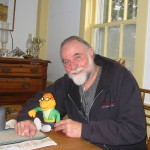 Yeah, I never thought I’d even live this long. When I was in high school I thought, “How old will I be at the turn of the century? Oh, I’ll be 60. Oh, I’ll never live that long.”

[laughs] Just goes to show you how wrong somebody can be.