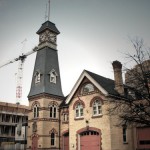 Recently Fraggle Rock producer Lawrence Mirkin gave me a walking tour of Toronto’s Yorkville neighborhood, where the show was filmed. Here’s a google map I made from the tour, a snapshot of the area between roughly 1982 and 1986. It includes the former studio site, performer accommodations and hangouts.

Mirkin says Toronto and Fraggle Rock were a perfect fit. “Given the show’s committment to interdependence and a global consciousness, I can’t imagine it being filmed anywhere else.”